In which I conclude bin and bench are Duchamp without a museum, Warhol without a copy.

In which we learn why it took me over 7 years to see the combination and I explain why I listen to the radio.

What is the fascination for a bin and a bench, two ordinary objects in the public space around my apartment. When I moved into this apartment in the center of Almere in 2006 the bin and bench were already there and for almost 7 years they were just part of my surroundings. I would pass them a couple of times a week without really noticing them, I did not slow down to have a better look, I never stopped to sit down. I accepted them like you accept most of the objects around you.

During this walk in 2013 I passed a couple of bin and bench combinations as I did on many other occasions. But this time when I saw one combination I also saw the other combinations I had seen before. I am not a very visual thinker, it was not like some sort of perfect photographic memory arranging pictures in my mind, it was more like seeing a new language that has a pattern with variations: the bench is always the same bench, the bin is the same model,but varies in color and position.

There was no real reason for seeing the pattern, it is this thing the human mind tends to do. Seeing it was the start of a change, the bin and bench were no longer ordinary objects, they became interesting and extraordinary. This change did not solely happen on this sunday, more changes would follow in the following weeks and years.

In which bin and bench get a character and change from a visual combination into an invitation to sit down.

At the moment of realizing there was a pattern it was mainly a visual impuls, the bin and bench became a visual combination, or better: a series of different combinations. During the rest of that walk they also became somebody’s decisions on color and position. How were these decisions made? Was it a random decision by the person placing them or did they try to match something in the nearby surrounding. Was there a loose set of rules or maybe carefully designed set of instructions, planned by somebody at an office?

Objects can become something else without physically changing, they can change by a thought, change by association, change by combination. An ordinary object can make you wonder, and the object is no longer just an object, it needs a history, an origin with a reason.

The next weeks I made a couple of “bin and bench”-safaris to document the bin and bench combinations with my camera. I enjoyed discovering new combinations, I was so pleased to find 2 benches sharing 1 bin. I also found out they were not all the same, there were different models of both benches and bins. There is not very much variation, manufacturers offer only a limited set of public furniture. These limitations challenged me to not only find the combinations, but to make my own combinations as well, both mentally and physically. Looking at the pictures, the bin and bench became a working material for me. Doing this I spent quite some time with them and when you look longer at things they start talking, they reveal their character. The bin and bench started developing their own role within their own hierarchy. It is the bin that changes position around the bench, the bench is the stable factor in the center of the picture. Of course I can change the position of the bench, but when I made the pictures there was no question about it, the bench is in the center. The bin is more an assistant that adds its color, giving a different character to each combination. The bench invites you to sit down while the bin adds some comfort and says you can eat or drink something and stay a bit longer. But don't make a mess, it should stay nice and tidy. 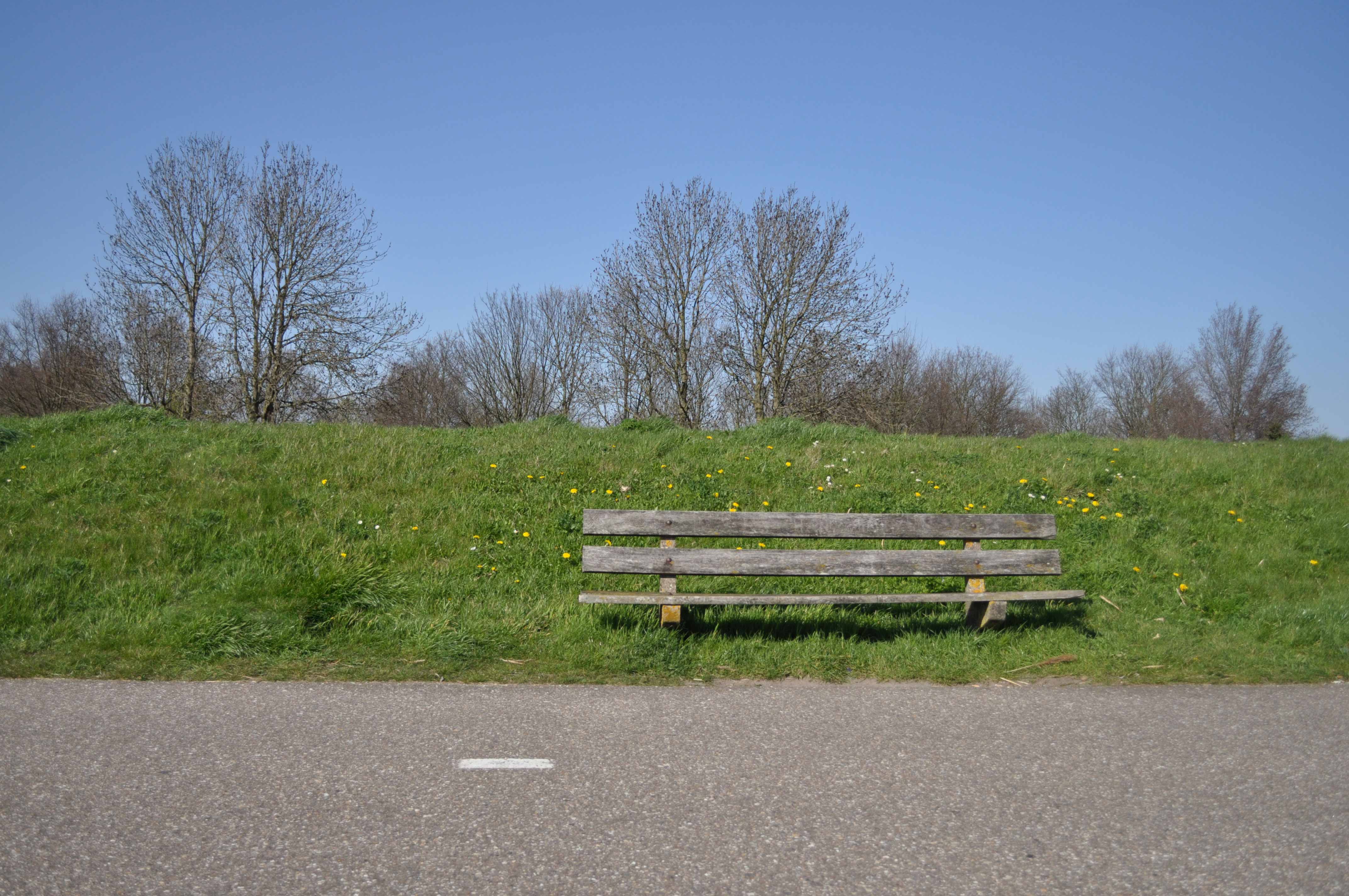 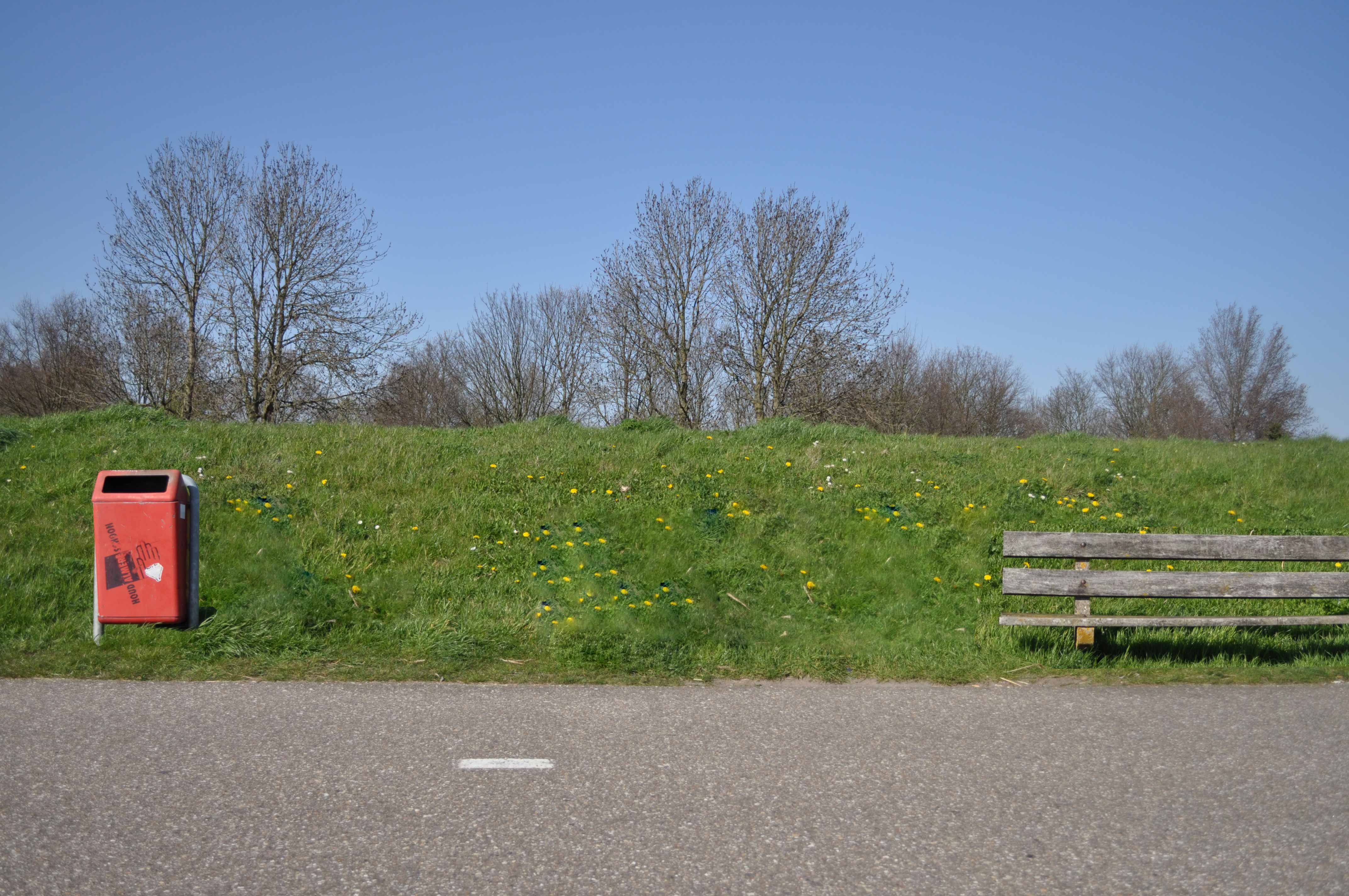 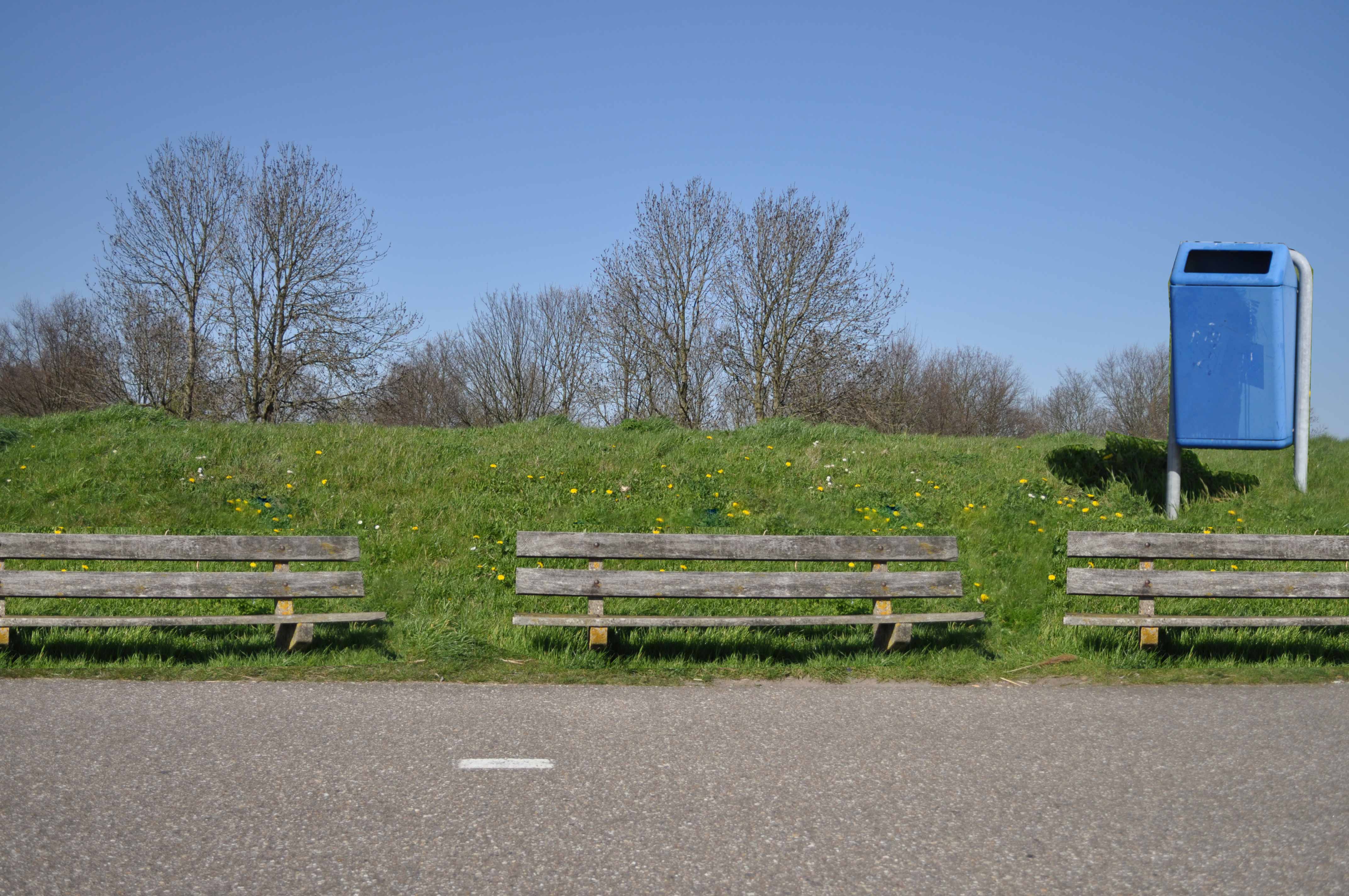 In which things change when I sit down on a bench to watch everyday life and a fork comes out of nowhere.

My perspective on the bin and bench changed again when I decided to sit down on a bench for a while. As I was sitting nothing special happened: a couple of gulls looking for food, tolerated by the ducks, a wooden fence with some buildings in the background, an old woman walking her dog, people with bags of stuff rushing home after shopping.

It made me wonder about everyday life, and how sitting down without a reason made me an audience. It made me wonder about the blind spots in our observations and our thinking. How I never think about a fork or how I use it. How we are surrounded by these objects that seem to appear out of nowhere when you use them, they were there all the time, you just did not notice them. 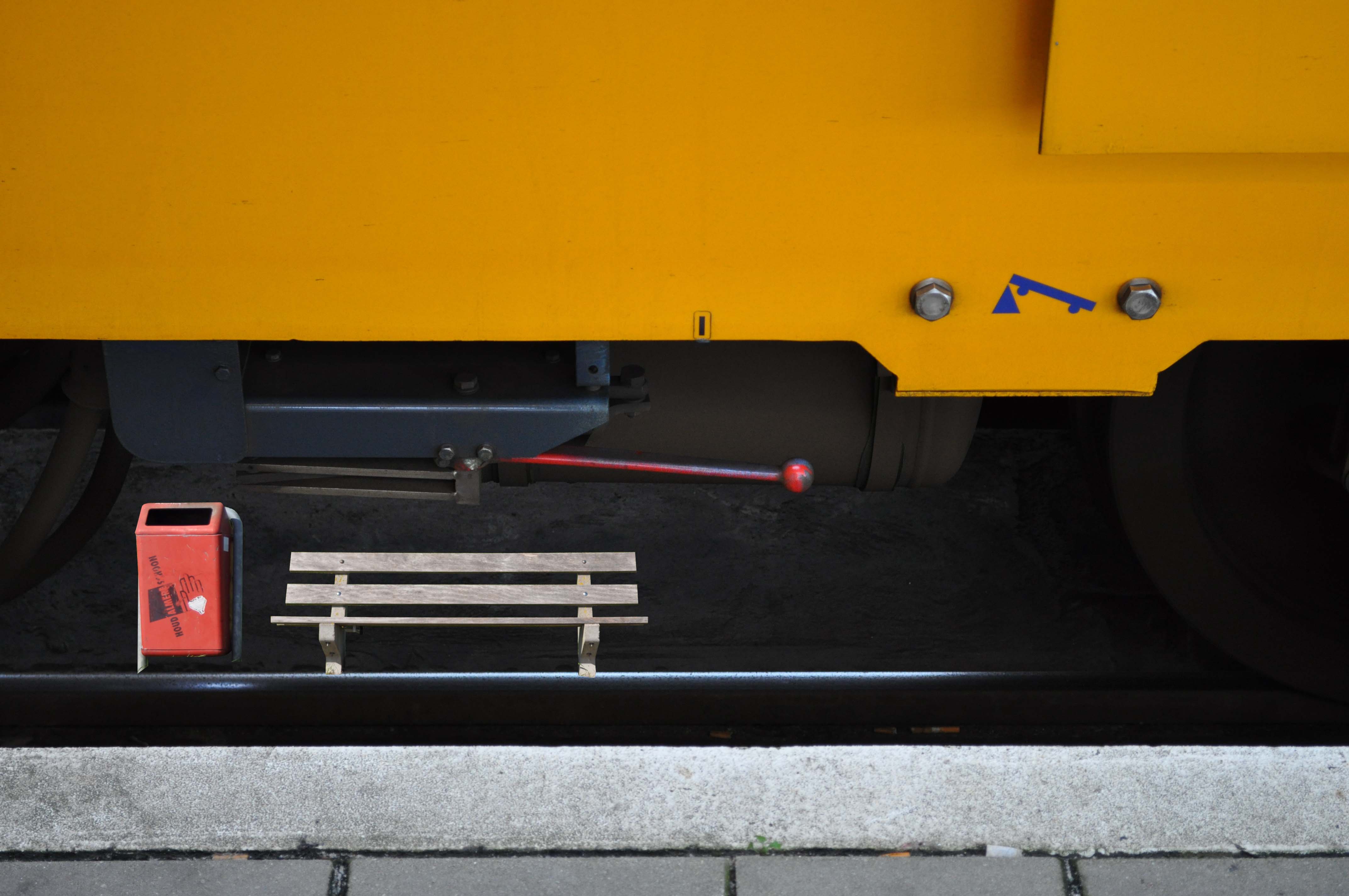 In which I see an old lady with a dog sitting down on a bench and we learn it is not important what we see.

During my safaris I noticed there were not a lot of people using the benches, the bins were hardly used. Sometimes the old lady with her dog sat down for a moment because she needed a rest and occasionally there were some colleagues having lunch. Most of the time the benches were empty, most of the time they were only a possibility to sit down. The bench doesn’t care, it is patient in showing us there is more than its designed practical function. The empty bench shows us the possibility to sit down and be an audience, to watch nothing special. It is a rhetorical footnote in everyday life. It can remind us of the importance of everyday life, the feeling of doing nothing, the beauty of being bored.

The bin and bench have become part of my thinking. They are now a collection I can share. Not only to share what I saw, it is an invitation to sit down and watch. At the same time it is an invitation to see the possibility without sitting down. Ger van Elk said: ”It is not about what you see, it is about what you want to see”. It is not the bin and bench that are fascinating, it is the possibility to make something fascinating out of something ordinary. The bin and bench are Duchamp without a museum, Warhol without a copy.